A famous quote “One black fish can make the ocean dirty”. This phrase is often used at certain occasions but it actually doesn’t defines everyone. We all know that our five fingers are not and cannot be equal, then why do we think that everyone should be judged by the same eye? Why? I often ask this question to myself in search of an answer, but, I always fail to answer myself. 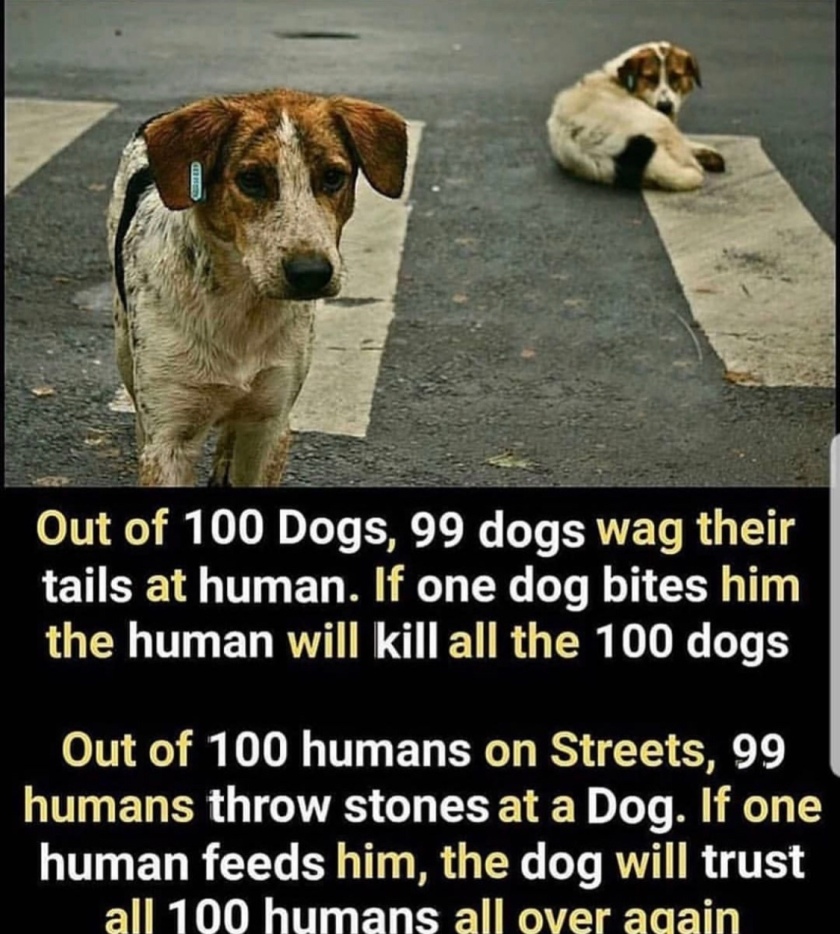 I find it pretty weird when we talk about equality, because we don’t know the meaning of equality by true means. Two legged people decide about a person’s likes and dislikes by just judging him by it’s nature. Similarly, when it comes to an animal, the same two legged person decides about whether the poor four legged animal deserves to live or not. Why? Who are we to decide about the time frame about any other living being? The picture that I shared above, means a lot, it has a whole story behind it. It only takes a minute to understand that, Equality lies in every thing and every living being. It is our responsibility to speak up for it and demand from those who are lacking behind.

We are no one to judge anyone for their actions as it all depends on situation what made it occur. As the quote goes ‘action speaks louder than words’. We need to speak up, step forward and think beyond our thinking. I am sure, it can make a vast difference towards our society and thought process.

Animals have equal right just as we do on this land! 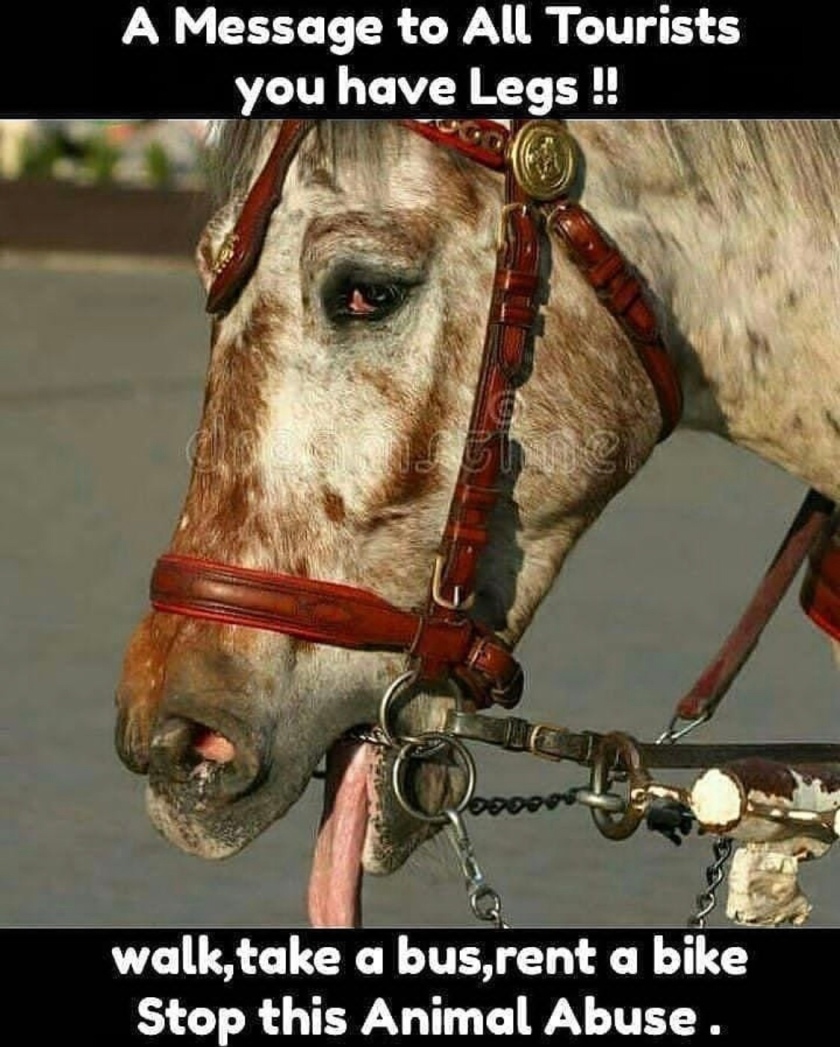 Using horses for entertainment, traveling or even carriages, itself is an abuse. They feel hot, tired, sick, thirsty and hungry by taking you out under any weather just so that you reach to your destination. Ever wondered about them? Tourists need to understand that these Horses are dealt with cruelty and abuse. They’ve been hit, starved for days so that they perform well and their caretakers can earn more money.

Just look at this poor baby, don’t you feel the pain that he is going through. Look at his eyes, tongue sticking out, look at the metal piece in his mouth? That’s all a painful task!

Everyone should take a stance of not using any sort of animal as a carriage or even as a source of an entertainment. They are brought into this world for beautifying our nature not for picking up heavy people’s weight! We complain if we are given to work over time, how can these animals complain? We shout when in anger- what about these poor souls, who cannot even act annoyed because they know that they will be hit with a whip😔

Caretakers- Just for the sake of earning money they mistreat their own breadwinner, whereas the tourists, it is their source of entertainment, they make that poor animal suffer without realizing how will he be treated- if they didn’t perform well.

Think before it’s too late 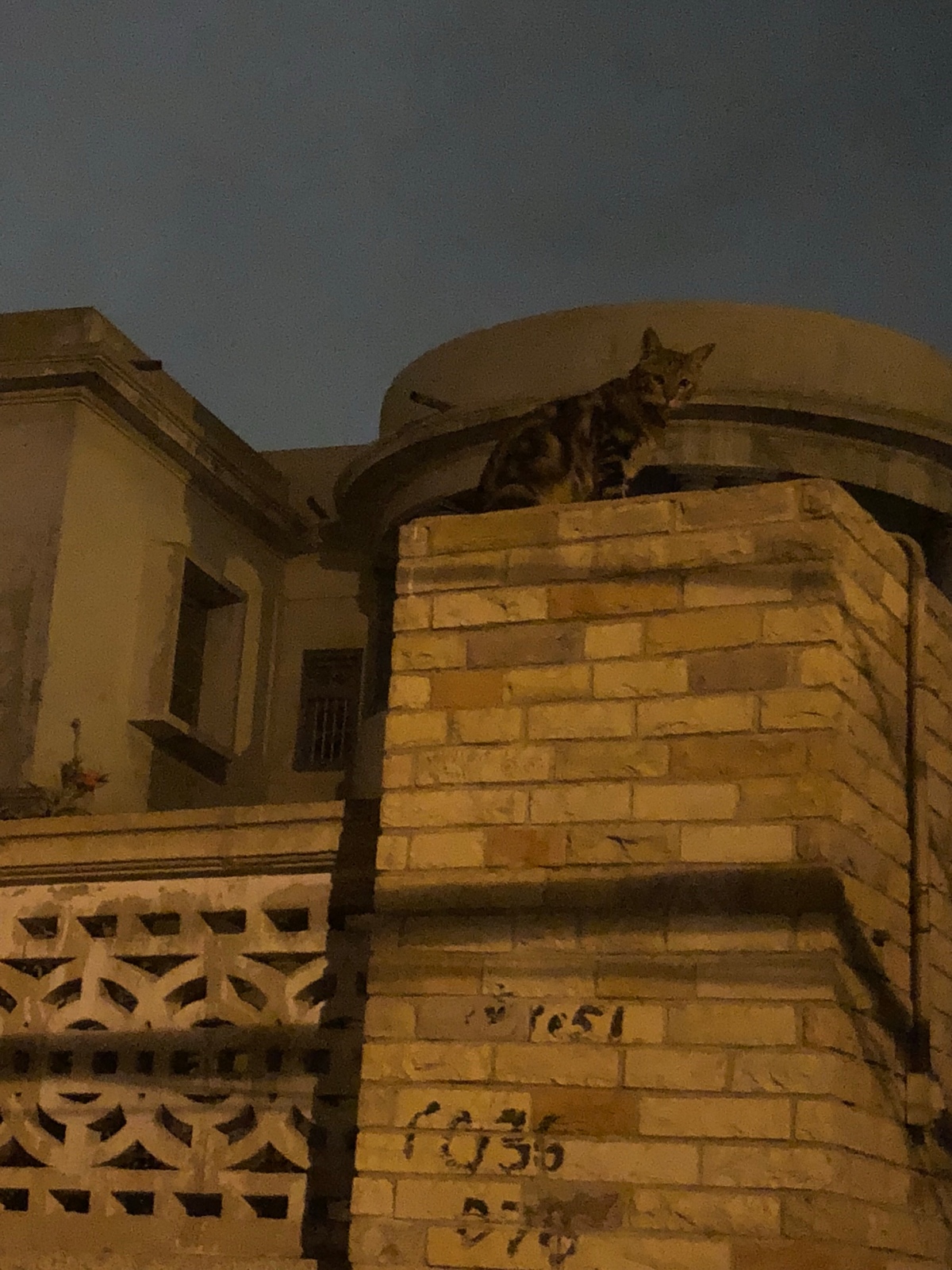 It’s the first day of the week with so much to get done with. As usual, before leaving home I said goodbye to my Diesel and Tiger, so that they know that I will be home after couple of hours. (I know- most of the pet parents do talk to their fur babies which people who don’t own pets, can’t relate to but that’s totally okay).

Upon my arrival after sunset, as soon as my car reached at the main gate of the house- I saw a glimpse of “ears” popping up in the sky. Upon keeping my focus on the ears, I suddenly got to see Tiger’s head and there he was spotted sitting in his usual pose. 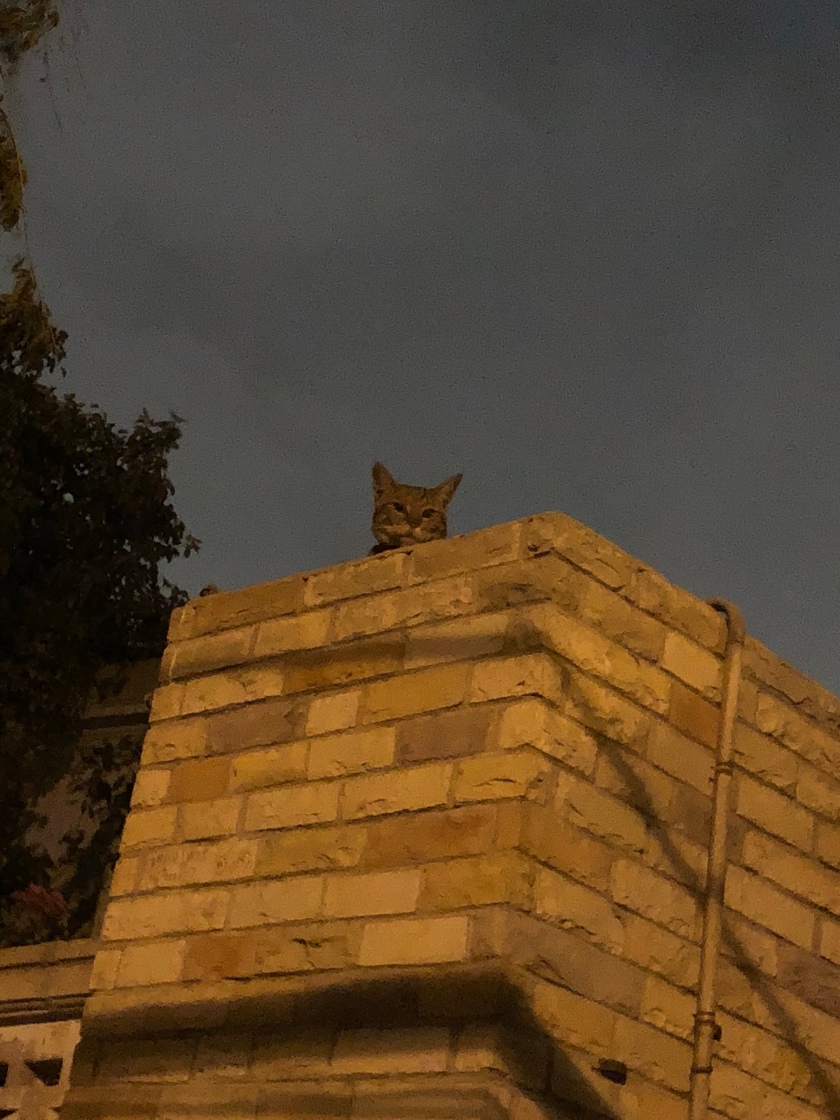 I couldn’t resist myself to not to click the picture of this little cutie. I am so amazed the way these fur babies turn our tiring day into a happy day, where we forget everything right after they greet us. It is just simply beautiful. The feeling of being loved unconditionally and letting us know that what we mean to them- this feeling is just inexpressible.

It is usually considered for a dog guarding us from any unforeseen incidents but after having cat, I believe I have to admit that they too guard their humans. Before, I had a different opinion but now, my perceptions and assumptions have totally changed and you bet, it is for good! I always say and I have to admit that yes- cats do make a difference in our lives and they are no less than a dog.

-By the way, my Tiger loves to eat Dog Food🤣-

Hoping everybody had a brilliant week. First of all a big thank you to those who got in touch with me personally. I am so overwhelmed with the feeling that my followers look forward to my posts. Thank you everyone! ☺️

Before I begin with my regular postings, I would like to mention that- I am not going to entertain any inappropriate comments on any of my posts regardless if you like or dislike. The fact is creating awareness and it is time that we should step a little ahead, be stronger and face the struggle and hardship together rather than pointing on others or passing on hate comments.

My writing represents the inner voice of every animal out there. I witness their pain, happiness and mixed emotions whether they are in shelters or as a domestic pet- each and every word simply represents the Animals. I am really glad to see a positivity that my writing is bringing between each and every individual and to see them implementing on their daily basis is like mission accomplished.

Thank you everyone for your support and being a part of my cause to create and bring a Change in our Furry Friend’s life.

I saved a Life!

Ever heard that voice from inside yourself? What a feeling it is to actually be happy from the inside out. As it is said “Success comes to those who go out of their comfort zone”. So, similarly- happiness comes to those who seek happiness in tiniest things around. We often tend to get hyper or even fake out stories on social media trying to actually act like a Hero! Honestly, how many of us actually try to go out of our set zone to basically help someone?

Since the time I have had pets, my life has been revolving around each and every animal existing on our planet! It might sound a bit weird to some but if you think about it- you would understand my thoughts. All I know is, we have a short life and in this short span of time we have to study, earn, get a good job then settle down- also we need to take our own hobbies into account! And what if, we also take a step forward and be the helping hand of someone in dire need! That gut feeling from the inside really pushes you hard to the extent that you would actually do anything to safe that poor soul.

There have been times where I followed my inner voice and eventually ended up going all the way to save an animal. You wouldn’t believe and it was a beautiful Eagle who accidentally got electrocuted by one of the electrical wire. I had no clue with handling an eagle but was totally devastated to find the bird in that condition lying in one of the place of my dog. It was 2am and I had immediately called the Vet. Thanks to him that he came over by half an hour and took the bird with him. Because I feared that my dogs would have bothered the Eagle and that birdy wasn’t in the condition to fly or even save his life.

The next morning, I called my Vet and found out that the Eagle has been named as “Flight”. Upon asking the Vet, he answered “Flight (The Eagle) has been very enthusiastic on flipping her wings though she is injured but is still trying to fly”.

The other day before going to bed, I thought to myself that I have been blessed to save a soul and nothing can beat the happiness that I can feel at that moment.